Happy Birthday Emperor, and Thanks for the Good Advice 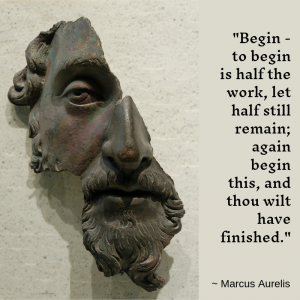 Today marks what would have been Roman Emperor and philosopher Marcus Aurelius’ 1898th birthday. That’s after some minor adjustment for a little Julian calendar anomaly hundreds of years ago. Adjusted or not, he lived a really long time ago. Apparently Marcus had a bit of influence back then.

Did you know he wrote a book?  Not surprising, given his philosophical bent. He entitled his work “To Himself”, it is now known as Meditations. I suspect how-to-be-a-good-writer books weren’t so common back then. I’ll even suggest that self-help books were relatively unknown in the Roman Empire.

Timeless Advice from the Emperor

Despite that, Aurelius offers sound advice for would-be authors.

If you’re like me, you’ve got little notebooks and random scraps of paper, and maybe index cards with flashes of brilliance on them.  If you’re like me, they may be populating your glovebox, crinkling in your handbag, nestled in between bills and magazines. Great little gems, scenes, starting points, mental pictures, scattered amidst regular life and that paying job.

What good are they doing you?  Well, other than helping kick in that declutter urge.  You’ve jotted down that great bit of inspiration, but it won’t gain much traction scribbled on the back of a Walgreens receipt.

More recently, some Nike marketers paraphrased the great philosopher and (snicker) ran with it. Apologies, sometimes I just can’t help myself. But you cannot deny that this advice works. It worked for selling ridiculous quantities of casual footwear. And it’ll work for you, too.

That novel or poem, short story, memoir or even flash piece will never see the light of day if you just think about it.  Get pen in hand or fingers on keyboard and start saving those words rattling around in you head. Sit down and do so regularly, and if you do, as Marcus reminds us, “thou wilt have finished”.

Blogging from A to Z ~The Letter J