Many of my yarn crafting friends have committed to creating temperature scarves, afghans, and blankets. You gather up a good-sized palette of yarn, and knit or crochet a small portion, choosing yarn color based on the daily temperature.  And then at end of the year, you’ve got a completed item that not only keeps you warm, but memorializes the whole year’s weather.  And who doesn’t want to remember that, right?  Just think, if you make one every year, you can document global warming in your zip code – in a  warm, cozy, cuddly kind of way.  How cool is that?

So, am I up for the challenge?  I’m feeling a little pressure here.  After all, January has already started… which means I am behind.  Crap.  Most normal people would be perfectly fine just starting when ever.  But of course, they’re not quite as OCD as me.  Can I muster up enough flexibility to attempt this?  Yes, yes I can.  I can do this.

Okay, first the pattern.  Well, I’m keeping it simple.  I’m making a scarf, and a quick search on Ravelry turned up guidelines and a recommended c 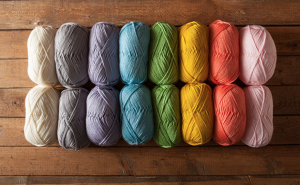 olor chart.    Looks pretty straight forward.  Not sure I love the palette, but no big deal. I can easily come up with something I like better.

I dislike the idea of 24 skeins of cheap yarn, so perhaps I’ll use fewer colors and better fiber.  I went online and found a lovely set of reasonably priced yarn – no worries about mixing fibers or dye lots. Call me a happy camper.  It’ll be a few days before my yarn arrives, but that’s okay.  I’ll just knit a week’s worth when I start.

Okay, what about the temperature part?  Some are checking the thermometer at noon every day.  I’m far too lazy for that that.  I have a fabulous outdoor thermometer right on my desk.  I’ll take a quick glance when I’m ready to knit and that’ll be it. I’m going to be traveling a bit this year.  Guess my colors will depend on weather conditions wherever I am.  There.  Decision made.

Wish me luck… I’ve just committed to 732 rows of scarf.  Go ahead, check my math – two rows for day in this leap year. And an entire year of picking up the needles daily.  Not a resolution, but still an exercise in discipline.  I can do discipline, yes I can.