“I am a perfectionist and a scaredy-cat.” 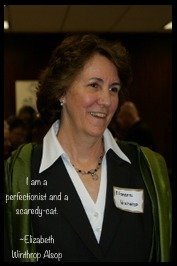 Today Elizabeth Winthrop Alsop celebrates her 70th birthday. Elizabeth has published children’s, young adult, picture books and historical fiction as well as memoir – more than sixty books since her first, Bunk Beds, in 1972. Elizabeth is best known for her middle grade fantasy classic, Castle in the Attic, and has received numerous awards. She’s recently done a Ted Talk about creativity and risking exposure as a writer. It can be viewed here.

In her Ted Talk, Elizabeth advises writers to follow where their creative urges take them. Wise words. Sometimes my characters seem to have a mind of their own. They insist on acting in ways I hadn’t planned. My stories have been known to fight me in an attempt to veer in unanticipated directions.

I should loosen the reins.

Which is not always easy for me.

I have a plan, often an outline. I am detail oriented, definitely more plotter than pantser. And I may just lean a bit towards having control issues. But then my story twists in a burst of spontaneity I’d repressed with the weight of my detailed notes. Or a character decides to do or say something that I didn’t authorize.

So I pause. And after a while, I can remind myself that my character is making their own decisions because they’re just that real. And that the unplanned variation may improve the story.

But only if it give it a chance.

So I try to turn off the orderly part of my brain and just get the words down.

And the result may be better than I’d anticipated. I like to think I’d planned the perfect novel, but I suppose the creative recesses of my mind have a better idea. If only I can fight off the resistance and follow those creative urges.

Elizabeth reminds us that as writers, we are perfectionists because we get to have our failures privately. I take this to heart when I find myself comparing the ugliness of my first draft with that finished novel on my bedside table. That little activity is one of my own personal private opportunities to see my work as a failure. All alone in the comfort of my own home. Then I shake it off and move forward. And not a soul knows. [Well, I suppose the cat is now out of the bag]. I love the idea of keeping my failures under cover and letting the world see that final polished bit of work.

I’m a scaredy-cat myself.  Elizabeth shares that hiding behind our characters allows us to avoid real-life confrontation. So maybe I’ll create a character that bears resemblance to some real-life people who’ve been on my mind. And then I’ll have them slip in a puddle and drop their coffee. Or have the perfect wedding. Or wreck their car. Or contract food poisoning. Or get upgraded to first class. So many possibilities, and limited only by my imagination and the depth of my emotion. How is that not fun?

Go and take 15 minutes and hear what Elizabeth has to say.

My late sister and grandmother shared a September 14th birthday. I’m pleased that I was able to learn a bit about an author who was born on that day as well. I hear each of their voices in parts of Elizabeth’s Ted Talk, and an involuntary little smile tugs. Ms. Alsop, I think you’d have liked the both of them. Thank you, Elizabeth.