A dozen of us gathered round, chattered and nibbled and feasted and enjoyed one another.  Our friends’ dogs are always welcome, so we monitored their competition for title of Beggar Extraordinaire.  Unanimous decision – the dogs won.

I say, get the negative out of the way first, then we can bask in the glow of the good parts.

But, as far as griping goes, I guess that isn’t so bad.  Some friends suggest we enjoy Thanksgiving because none of us were actually with family.  I can see a wee bit of merit to that idea.  All in all, despite a couple of bumps (and what Thanksgiving gathering doesn’t have those?), I’d say this year was a winner.

Moving on to all the good parts…

Mulled wine in a crockpot  – perfect for a blustery day.  Yes, it was my intent to get eveyrone warmed up and maybe a tiny bit lubricated.  And here’s what was out for grazers wandering through the kitchen – easy to snag without slowing down conversations:

All in all, before dinner visiting and munching went off without a hitch.  Introductions, small talk, dogs underfoot, catching up… I love my kitchen right before we all sit down.  Happy hungry people, on to the main event… 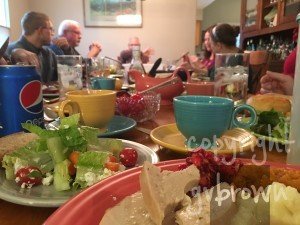 It was more than a decade before our dining room actually housed a place to dine – took that long for Dave and I to find one we agreed upon.  And we love what we chose, but it doesn’t seat a dozen.  So we rearranged the living room, hauled the kitchen table a
round the front hall, and set it on end with the dining table, overflowing into the living room.  I know we’re not the only ones who go through this each year.  And we avoided segregating anyone to a separate “kid’s table”.

I carved and plattered the turkey in the kitchen – mine never looks like the Martha Stewart video, and I’ve decided that next year I’ll try to emulate Alton Brown instead.  Still, the disassembled bird looked appealing on the platter.  We dined on my grandma’s Fiesta Ware,  spooning and slicing with my other grandma’s silver.  Both gone for years, but still treasured and cherished and remembered each time we drag out the feast ware.  We gathered round, began passing platters and bowls, and, well, you know the rest.  Here’s the recap:

All in the details, folks.  Our table was long, so our table sported two each gravy boats, butter dishes and S&P.   Guests appreciated speedier access and the table suffered less reach-across-the-table spills.  Some standards grace our table by tradition, some new tastes for adventure:

We took a break before dessert…

We wandered away from the table, cleaned up a bit, chatted, loved on the dogs,and yelled at a little football.  Once we’d adequately recovered from our tryptophan coma,it was time to work on maximizing our carb consumption.  Pretty much all the dessert was provided by our guests.  No extra days baking for me – I am so going to do it this way again next year!  And every single one of us had at least a little.  Who says you can’t have a dessert or two, just once a year?

A bit more lounging and visiting, some picking up, getting the dogs back inside… our feast was coming to an end.  I deposited  take away boxes on the counter and instructed everyone to have at it.  That started a frenzy of activity.  Made certain that all the dessert items were destined for a different home.  Dave made a quick run out with shovel and salt to ensure safe passage to vehicles, and our friends headed for home.

Of course, Thanksgiving is not just about feasting.

Thanksgiving at our house ended on the couch with a cuppa.  We caught the end of the Macy’s parade we’d saved just in case, the quiet rumble of the dishwasher in the background, while outside, snow continued to float down.  Just like a Norman Rockwell, inside and out.

Feasting with friends is just one of so many things to be thankful for.  Hoping you’re Day of Thanks was as enjoyable as ours.