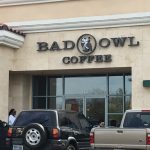 I’m not a wand-carrying Harry Potter fanatic, but I do think the book and movies are (1) pretty darn good and (2) kind of iconic.  And who doesn’t love coffee?  Well, lots of people, but I’m not one of them.  I like coffee.

So, when my social media exploded with news of a Harry Potter themed coffee place opening in Las Vegas NV literally days before I was to be in sin city, I had to add it to my itinerary.  You have to know I have an amazingly transparent internet presence, so of course I’m not in the least amazed at the magic of such precision targeted marketing.  In any case, I made it a point to drive myself down there to give it a try.  Henderson is kind of off the tourist beaten track, and this place is in a strip mall at the far end of a Eastern Ave, the long busy street with every chain restaurant and retail establishment imaginable.  And the traffic to go with it.  So getting there was a bit of an effort.

We arrived early afternoon, and spent a good ten minutes finding a place to park.  The line out the door testified to the success of the blitz marketing campaign.  Bad Owl Coffee had been open for exactly two weeks and there was a line out the door.  Good sign, right?

My companion and I took our place in the queue and glanced around.  It was immediately clear that we were decades beyond the target market in age, attire and demeanor. The clatter and chatter, high ceiling and hard surfaces made conversation nearly impossible, so we perused the coffee/tea menu and took a look in the pastry case.

While we waited, surveyed our surroundings to evaluate the Harry Potter-ness of the place.  There was a really really nifty metallic owl sculpture on the counter.  I’d have been happy to take that home and put it in my office.  A brick wall in the back with a Hogwarts Express sign.  Beyond that, a wooden direction sign back near the restrooms likely had familiar destinations, but I never actually got close enough to confirm that. The tables had themed words and symbols etched into them, pretty cool.  Definitely not in-your-face Harry Potter, but enough to claim a theme.  Fans will be pleased, I think.

We made it to the front.  I was curious about the Butterbrew latte, particularly since it was the only drink on the menu that that gave a nod to the theme that had been so highly hyped in all the press.  Well, okay, they did offer a lavender latte, and there is a Lavender Brown character in HP.  I suppose I should give them that, too. Other than that, a typical menu of the same old  hot and cold coffee drinks and some nice teas.

Speaking of the press, remember how I said I didn’t feel particularly special about getting that marketing blitz on my screens?  Man, was I right about that.  A quick google search brought up what appeared to be a very  intentional marketing explosion.  One had the owner expressing “surprise” that so many people had heard of them.  Every single article/tweet/post featured “Harry Potter” prominently  To be honest, I’m impressed with the marketing – the place had been open exactly two weeks and there was a line out the door.  Well done. 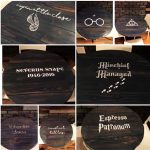 Okay, back to the front of the line.  I asked how long they’d been open.  “Weeks”, was the response.  I don’t know why or how, but she made “weeks” sound vague. Wow, I’ve been at new eateries and coffeeshops bunches of times, and they can usually tell you the day , the date, sometimes the hour they opened. They’re  proud and excited and pumped. Clearly not the case with this young lady.  Fine, maybe she’s had a long day.  I can sympathize with fatigue.

So I let it go and inquired “What flavor do you put in the Butterbrew latte? Butterscotch?  Or something else?.”   “Butterbrew is butterscotch and a secret flavor I cannot reveal.” The response was flat, as if she’d answered that question a thousand times already.  She probably had,  but hey, every customer right now is still brand new. If you’re already bored with it, then why am I here?   The shine of all that promotion was beginning to tarnish.

Of course I ordered the Butterbrew latte – that was why we’d come.  I told her I prefer my drinks not so sweet and asked for half the typical syrup.  She replied that there drinks weren’t too sweet.  Okaaaay.  Then she asked, I kid you not, if I wanted the espresso shots in my drink.  I am taken aback.  What? Aren’t their lattes made with espresso?  Well, yes, she explained, but sometimes we leave the shots out for children.  Excuse me?  I’m a middle aged woman and my companion was 20 years my senior.  Children?  Yes, of course I wanted the espresso shots in my latte. By now I am as close to speechless as anyone has ever seen me.  As we turn to the next spot to pay, she rolls her eyes.  Apparently she thinks un-hip women over the age of 22 who want espresso in their espresso drinks are blind as well as overly demanding.  Wow.

I loved that they had a chip-reader that worked – so many businesses are still working on that.  I didn’t love that I was charged $2.00 more than the price on the menu.  Are coffee taxes that high in Las Vegas?  By now my companion was uncomfortable with the noise level and was eager to escape the chaos, so I just skipped the option to tip between 15 and 30 percent and signed the tablet.  I glanced at the tip jar, which contained three five dollar bills.  No change, no singles.  Five. Dollar. Bills.  Seriously?

So we waited.  And  then waited.  And waited some more.  And then my name was called, mispronounced horribly, which is just not acceptable in such a hipster environment.  And I was handed a three-quarters-full lidless cup.  Maybe they were having a milk shortage.  My job, apparently, to grab the lid from a pile and wedge it on the cup myself.  Some 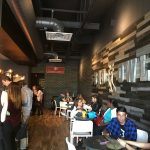 day they’re going to regret that idea when the cup slips and someone’s drink splatters all over that tablet.  Thankfully, that day was not today and that somebody was not me.  I know, people close to me will be amazed.

We escape to one of the two outside tables for relative quiet of the parking lot and street traffic.  We sit, and I take a sip.  My 12-second old latte was lukewarm.  I cannot taste the secret ingredient.  I cannot taste the espresso, though I saw them put it in there.   I can taste butterscotch syrup.  Lots and lots and lots of butterscotch syrup.  Maybe it needed a mix.  I swirled the cup, took another sip.  Even more cloying.

For the first time in my life, ever, I threw away a six and a half dollar coffee drink.

Full disclosure – I am picky about my coffee.  At home I drink a light roast espresso that comes from Italy.  When I’m not traveling, I prefer a local place that roasts their own organic beans.  I don’t like to drink “brews” from that giant chain that not longer actually pulls shots because yuck.  As for chains, give me Dutch Bros, who knows how to make a good cuppa and has fun doing it.

But I am cheap and I like my caffeine and I’m almost certain I’ve never ever discarded a just purchased, full cup of anything.  I’ll choke down almost any beverage if I’d payed that much.  Ask anyone who’s ever met me at a Starbucks.

So, final take?  The decor is as Harry Potterish as they can be without violating Universal’s

copyrights, I suppose.  The owners have marketed the hell out of the place.  The butterscotch concoction is a nod to Harry Potter fans, but poorly executed.  The price is high, the coffee isn’t that good, and apparently customers who aren’t young and hip and extra attractive need not wander in.

So, Harry Potter fans will check it out.  Once.  At least for now, until that double-edged social media sword swings.  Even without a high-precision carefully executed marketing plan, the word will get out.