Today I received an email asking if I had video to be included in a surprise for Martin Clunes when he’s on the iTV daytime show “Lorraine”.

Here’s an excerpt from the email:

Shame I don’t actually have any video – never met the man.  And granted, the email likely went out to everyone who subscribes to a fan blog.  But still – I feel slightly special

I do find myself wondering about increased inclusion of North American fans.  I’m thinking there is a carefully crafted clever marketing plan afoot.

Oh, now I will be dreaming about going to England and meeting Himself.  Wonder if Martin and Philippa would accept an invitation to visit stunning Colorado? 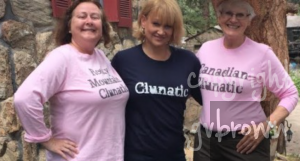 My friend Lisa was interviewed for a piece in the Doc Martin Online Blog.  She is truly a super-fan!  Not only does she know pretty much everything about Doc Martin and Martin Clunes, but she designed and sold Clunatic t-shirts to raise money for a charity Martin Clunes (and I) support- Julia’s House Children’s Hospice in Dorset.  And… they used the photo of the three of us in our Clunatic shirts at our Rocky Mountain Gathering this past summer.  How cool is that?

Meet Lisa Fenderson! Where do you call home? Virginia, USA. Basically the East Coast between New York and Florida. Tell us a little about yourself? I was born in Puerto Rico but moved to Virginia, when I was 11. My Dad was in the TV and Radio broadcasting industry, and I followed in his footsteps. …

It is no secret that I’m a big-time fan of Martin Clunes.  For those who don’t know (there are lots of you, no doubt), Martin Clunes is an accomplished actor who’s  practiced his craft for a few decades now.  Much of his work can be found on British television, and lately he’s best known for Doc Martin, a ridiculously popular comedy drama that has aired in Great Britain for nearly 15 yea 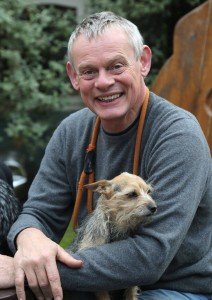 rs.  As an actor, Martin Clunes is a master of physical comedy and subtle facial expression, and he’s a joy to watch on Doc Martin.  He’s portrayed a cartoon puppy, a swinger, a sad bachelor, and a serial killer (chillingly) and lots of other things.   I admire his tremendous talent, but also his professionalism.  His long career didn’t just fall in his lap.

Doc Martin is produced by Buffalo Pictures, which is a partnership between Martin and his wife, Philippa Braithwaite.  He says she’s the brains and details.  I think this man is slightly more savvy than many think, and the work he and his wife have done together is first class.  I’m hoping to see more documentaries, even though I’m sure they’re not huge money-makers and may be hard sell to networks focused on the bottom line.  Regardless, these two people work clearly compliment one another professionally.  As far as I can tell, their personal life is far more normal than some of our celebrities here.  I admire the groundedness of this family. Its cool that they don’t seek the spotlight.

My friends say he’s not the most attractive man.  Those who’ve met him tell me he’s incredibly charismatic.  Pretty standard for an actor – that presence is kind of necessary on the screen, isn’t it?  Well, he’s tall and has green eyes and graying blond hair, neither of which I’d complain about. The man loves dogs and horses and children and has a silly streak – how could anybody not like that? And yes, he’s got those ears and self-proclaimed “child-bearing lips” (remember I said savvy…?).

But, well, I’ve always been taken by the doing rather than the being.  Martin and Philippa hold an annual fair on their property, raising huge amounts of money for three charities.  Two of those charities are hospices.  Those who know me well are aware that hospice has a special place in my heart.  I’ve volunteered with a local hospice for years.  My dog was a therapy dog and wagged her tail through all kinds of places and solicited pats and hugs and smiles and joyful eyes from all kinds of folks.

Take a look at these photos, recently taken at Julia’s House Children’s Hospice in Dorset. Martin Clunes brought Heidi, Arthur, Penny and Jim by for a visit with some of of the residents.

So, I know, you’re saying yeah, yeah, what celebrity doesn’t support charity – they need the tax write-off and the PR.  I get that.  So here’s the deal… I get to decide whether I think Martin Clunes does all this just for the photo-op (and yes, there was a photographer there) or because he genuinely enjoys what he’s doing.  I’ve  decided to go with… both.   Yes, the reality is that his job requires him to be visible. But hey folks, he showed up at the Julia’s House Children’s Hospice (one of the charities he and Philippa support) with his four dogs in tow, wearing ordinary-people clothing and a smile.  And the photos we see show the kind of interaction I would love to manage when I visit patients.  Even naysayers who claim he’s a talented actor and that’s what he’s doing – even they cannot tell me those kids aren’t engaged and exited and enjoying themselves.  The man brings joy to sick children.

How can I not love that?

Now you know why I am aMartin Clunes fan.

No secret I’m a fan. Devoted to the show, engaged by the characters, smitten with one particular cast member. Doc Martin Series 7 started airing in Great Britain a couple of Mondays ago. In a few more weeks, I’ll be able to start watching episodes through AcornTV, a great streaming service that I use to watch British television. Otherwise, it’ll be next year before the newest season will air here – when and where depends on individual contracts between your local PBS station and American Public Television, the distributor. And then… just in time for Christmas, the DVDs come out in USA, Great Britain, and Canada on December 8th. Two years between each filming, then even more waiting? Excruciating! Unfair! Seriously, iTV should look into some way round this problem.

Regardless, the Buffalo Pictures and iTV publicity machine is at work. These interviews, exclusive to whatsontv.co.uk, give us a little taste of what is to come, as told the a few cast members.

Ian McNeice is Bert Large the plumber/restauranteur/schemer.  Bert is one of the first of Portwenn’s quirky residents the Doc met when he arrived – to a soggy end. . So, here he is in a publicity video a couple of days ago….. and he shares some spoilers that hadn’t been leaked elsewhere.  Bert’s Latest Schemes   I love that Ian shared a bit more that we’ve seen in other publicity gigs.

John Marquez’ PC Joseph  Penhale is comic genius. How can you not love his bumbling self?  He’s so self-unaware, but still manages to come through in a clinch.  The taser, however – maybe not the best idea.  John shares that Joe’s got a love interest this series.  PC Penhale Wants a Wife

And, of course, Martin Clunes…as the Doc himself. Therapy, a really cool surgery, and idiots all over Portwenn await this time around.  More humor, less darkness, and a few more forehead bruises, we hear.  Will there be reconciliation?  Some Changes for Doc   Martin discusses fun times with old friends, great guest stars, Cornwall every other year, and his grumpy Doc character, who he’s now been playing for 15 years.

Well, despite having to wait, I still got a little fix of some of my favorite actors discussing what I’ll be seeing.  I guess all is still reasonably right with the world.

I am not a very patient person.

Well, series 7  of Doc Martin is is in the can and due to be aired sometime soon in Great Britain on iTV.  Here in the states, it isn’t likely to be on my local PBS station until next year sometime.  Fingers crossed that AcornTV streaming has it sooner.

Its been TWO YEARS since Series 6 was released.  I know and understand and respect all the good reason why they only film every other year.  But, well, refer to that first sentence.  In any case, I’ve been following the fan groups, enjoying the photos and videos of those who flew across the pond and shared the experience of watching my favorite show being filmed.  There have been spoilers (Sigourney Weaver and Caroline Quentin, anyone?) and conjecture.  Lots and lots of conjecture and theories.

Well, here it is, the first trailer for the new season.  Notice they still don’t share an air date.  Recently I emailed iTV and was advised they won’t share that information until about ten days before the show is on.  And, not a shred of evidence of our surprise guests mentioned above.  I guess less obsessed fans will get to be surprised.