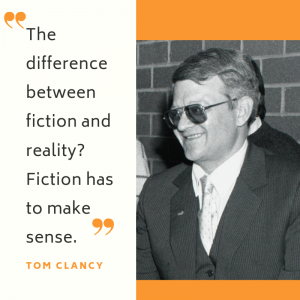 Today, April 12th, is the birth anniversary of Tom Clancy.

Tom Clancy was once a Maryland insurance broker with a passion for naval history.

Then he wrote The Hunt for Red October, which catapulted onto the New York Times bestseller list after President Reagan pronounced it “the perfect yarn”. Clancy was known for  weaving realism and intricate plotting into can’t-put-it-down suspense novels.

I can readily recall more than a few real-life situations that I’ve transferred to the page, only to find that they were unbelievable.  How can that be? It makes no sense that actual events or conversations don’t translate to fiction. Sense or not, the reality is that reality sometimes bends or tests or even shatters the suspended disbelief of our readers.  Why is that?

Have you ever written real life situations that were just too unbelievable to be included in your work?

Perhaps the entertaining conversation you overheard on the train doesn’t fit into your story. Or maybe your character wouldn’t be caught dead doing that crazy thing you saw the tourist do at the national park. It could be that what you observed was so jarring that it yanks your readers right out of the story.  Speaking of story, did that real-life tidbit actually further your plot or develop a character?  Did it serve a purpose?

The possibility exists that, sometimes, truth actually is stranger than fiction, and should be left alone.

Keep it in your idea arsenal for another time.  You never know when your fiction could use that dose of actual real-life.