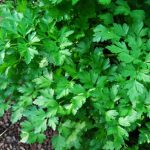 Parsley!  Who would think this humble herb would have such strong attachment to my Italian heritage?

It is early spring,  cold and damp enough to require extra layers. One of those sun-barely-up mornings that calls me to wander the yard and see whats up.  I’m in my jammies and bare feet, against every ounce of my common sense adultness.  All around me is tinged a warm sort of pink from the rising sun.  No cars, no planes, no music or doorbells or conversations, just an occasional twitter or tweet, the kind that birds make.  Emergence and rebirth, the scent of damp earth, a scampering bunny escaping the threat of me… this time of year a survey of my city-lot size domain of green brings peace, stillness, a calm.  Steam swirled up from my coffee cup, my only source of warmth. It’d be a short exploration.

As I wandered into my rain-soaked garden I  saw determined parsley plants pushing up through the mud.  This year, they’ve beat they’ve managed to beat the chives and the daffodils.  Determined little plants!  Back in the day, my Italian grandmother, Nonni, grew  parsley.  She was in California, so her garden had bundles of green year-round.  They grew in a long bed that followed the fence delineating property boundaries.  On the other side, the Gaspars had concrete, but my grandparents yard was green everywhere.  The parsley shared space with lilies of the valley.  Wow, I wish I’d have a high definition camera back then.  Or any camera, for that matter.  I think I was six, and of course preserving what was plain old normal at Nonni and Grandpa’s never crossed my mind.  Now, decades later, I can still see, smell, feel that little tiny piece of my past.

Back then, the only parsley everyone else knew about was that curly stuff. It usually showed up on a restaurant plate next to the baked potato.  And nobody ever ate it, ever!

But my Nonni grew flat-leaf parsley from seed she’d brought from Roccamonfina. That parsley came across the Atlantic in steerage, tucked away in a little packet just like the ones that held future tomato and zucchini and pepper plants.  Nonni nurtured and pampered and encouraged those little seeds into a small but productive garden in the tiny lot they shared with several families Methuen.  Then they made it over to Lawrence, again a small city lot, hardly enough sun, but they grew and ate every year, and saved seeds for the next season.  Finally, a big move to sunny southern California.  Oh my, the garden flourished!  Grandpa was retired by then, and he would spend half his days puttering, trimming his roses, plucking tomato beetles, shooing the chickens, trimming the lawn. Grandpa had a green thumb.

Nonni would hand me the shears and scoot me out, the screen door banging behind me.   And I would  snip parsley, just a little from each plant, not too much, so more would grow back for next time. I’d come back into the house with an armful of fragrant greenery.  Then I’d help her mince and mash that parsley with salt and lots of garlic, making a pungent paste. It would seem to take forever to come together into the absolutely smooth consistency Nonni required.  Later, my mother would be express her horror that  Nonni had let a youngster handle a sharp knife.  That perfectly smooth paste would go into Nonni’s braciole. I still dream about that rolled steak and the cooked-all-day sauce that went with it.

Our Italian heritage is more than name, language, history.  We find our culture and our past in the simplest of things sometimes, and some of our strongest connections come at random… like walking through a rain-soaked herb garden just after dawn on an early spring morning.