So, this blog post about sushi came just came through my feed.  Those who know me well are aware of my foodie-ness and interest in what people eat in other parts of the world.  I dove right in and took a look.  You can, too, here at Pickled Plum.  Caroline over there is a foodie, a photographer, a model, and sells Japanese cooking things and a cookbook on her website.  It was inevitable her blog would show up in my stream one of these days, given my years of making Japanese food a semi-serious hobby.  Ask me about my vast and pristine bento box collection sometime. I’ve been following her blog for a short while, and have enjoyed the beautiful food photos (anticipated, given her background) as well as some more in-depth than usual facts about jJapanese food. 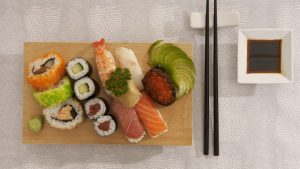 When this sushi/sashimi/musubi post showed up, I clicked so I could read more.  As Caroline has lived in Japan and I have not, I was curious to compare sushi in Japan and sushi in the United States.

As I mentioned, I have not lived in Japan; I’ve never even visited.  My practical knowledge is limited to some (no, I’m not sharing
how many) decades of experience eating in Japanese American restaurants, living in communities with a high concentration of Japanese Americans, and dating a Japanese American guy. Can you see a theme here?  My experience is in one country, Caroline’s is in the other – I was revved to read and compare.

I’ve also read every Japanese cookbook I could find, authored by experts in both countries, and plowed through a few Food of Japan and History of Sushi reference books.  So, though not practical, some of my knowledge does come by way of Asia.

Ready to Learn and Discern? Here We Go!

What Goes into that Sushi?

I so enjoyed exploring Caroline’s blog, Pickled Plum.  All kinds of great stuff over there.  Hope you take a look too!

Photos in this post come from Pixabay and are released under Creative Commons CCO.